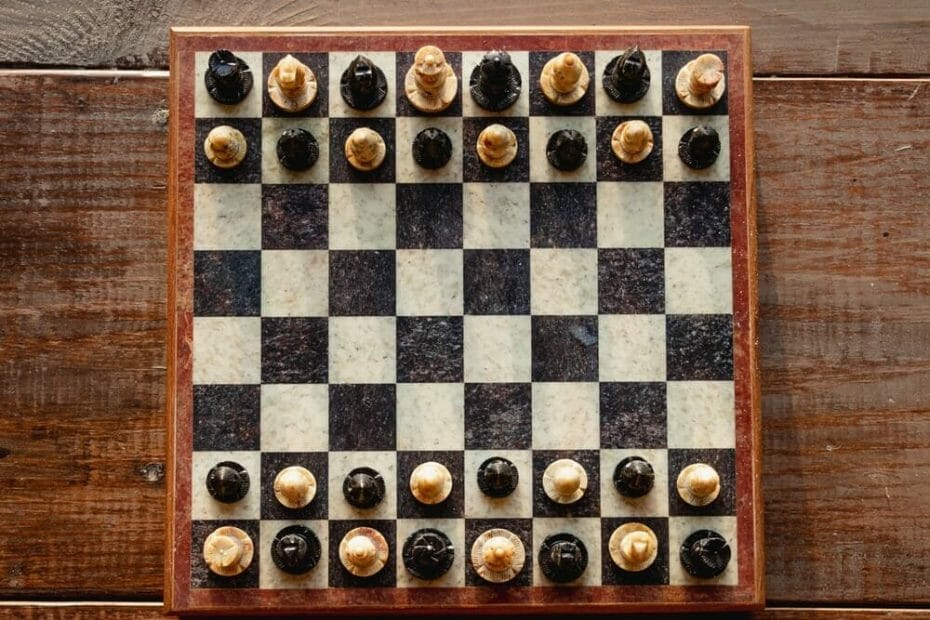 Different Types Of Chess Pieces And Their Functions

The first step to learning or even mastering chess is knowing the names and functions of each piece. After all, you need to know how to use them to be able to play.

In this post, we will learn about the names and functions of each piece of the chess board.

We will also learn fun facts about the pieces on the way.

About The Chess Pieces

Chess is played on an 8×8 board with 64 squares that come in dark squares and light squares in a checkered pattern.

There are six kinds of chess pieces.

There are major pieces and minor pieces in both colours. These apply to both white pieces and black pieces.

The major pieces are the Rook and Queen. They are the strongest players and are deemed more important.

The minor pieces are the bishops and knights.

The pawn is not categorized into minor or major.

When talking about a piece in chess, as in “winning a piece” or “losing a piece,” that generally only refers to the minor pieces – the Bishop or Knight. The major pieces and the pawn are referred to using their names.

Number of Each Piece Per Set

Each player has sixteen pieces:

Function of Each Chess Piece

Each type of chess piece plays a specific role in the game of chess.

The King is the most important piece.

The Queen is the strongest and the piece with the widest offence and defence range.

The rooks are one of the stronger pieces.

The bishops and knights are the middle pieces.

Finally, the pawns are the least powerful pieces, but they are the easiest to move.

The King piece is not the strongest; it can only move one square at a time, in any direction.

BUT, it is the most important piece.

Your victory or loss at the game of chess depends on which side has their King by the end.

The other piece’s function is basically to protect the King.

The Queen offers both the widest offence and defence range.

The Queen is the most powerful chess piece because it can move diagonally, horizontally, or vertically for any number of unoccupied squares.

The Rook is a piece that can move any number of vacant squares vertically or horizontally.

The Rook becomes an extremely powerful piece once it occupies an open file.

A Knight moves in an “L” or “7″ form. It moves one square horizontally or vertically, then two squares in a horizontal or vertical direction.

The Knights are the one and only pieces that can jump over other pieces – meaning, they can go over squares that are not vacant.

A Knight is valuable because of its ability to fork the opponent’s pieces. Forking means attacking two or more pieces simultaneously.

The Bishop is capable of diagonal movement for any number of vacant squares.

The pawn is the least powerful piece, but they’re extremely useful depending on your pawn moves. They can be used as sacrifices for the chess game to advance or as a wildcard that becomes a major piece later in the game with special moves.

They can move vertically forward one vacant square, with the option of moving two squares forward if they have not yet moved and the squares are vacant.

Castling is a unique move in chess where a chess player can move two pieces simultaneously – a Rook and the King. Castling is the only time that is possible.

Castling is a move to get your King to safety.

There are two types of castling – kingside and queenside.

Castling short or to castle kingside is to move the King to the side that’s closer to the board’s edge.

Castling is only permissible if the King and Rook are still in their initial squares or original positions and there are no other pieces in between the two. The King can’t also be in check, and the squares involved can’t be under attack by an enemy piece.

Pieces Involved: Pawn + Any other Piece.

In chess, pawn promotion occurs when a pawn reaches the eighth rank (the furthest rank on the board) and becomes a more valuable piece.

When the chess pawn reaches the opponent’s edge of the board, the advanced pawn can get promoted to a more powerful piece of the same colour – Queen, Rook, Bishop, or Knight.

No chess rules specify how many pawns you can promote.

So, theoretically, if your chess strategy gets all your pawns to the opponent’s edge of the board, you can have up to nine queens or up to ten rooks, bishops, or knights.

En passant is a French term that means “in-passing.”

The En Passant move is only permissible in very specific positions.

En passant is the only capture move in the game where the capturing piece doesn’t replace the captured piece on its destination square.

The en passant is a capturing move that can only be made immediately after a horizontally adjacent enemy pawn moves a two-square advance.

The capturing pawn moves to the vacant square that the advancing enemy pawn passed over.

Because it involves a particular condition, En Passant is rarely used, and even the tactical opportunities to use it are often missed.

What is a set of chess pieces called?

A chess piece is also called a chessman, and the set of chess pieces may be called chessmen.

How many chess pieces are in a standard chess set?

A standard set of chess pieces comes with 32 pieces or chessmen, 16 for each colour.

What chess pieces can jump?

Under normal conditions, only the Knight, but for Castling, the King and the Rook involved technically jump over the other – may it be the King over the Rook or vice versa.

When a pawn reaches the sixth-seventh rank (or second-third for black pieces), its worth is equivalent to a rook.

Usually, a pair of Bishops is much stronger than a Bishop and a Knight

When a Knight forks a King and a Queen, it is known as the “Royal Fork.”

Rooks are crucial endgame players because of their ability to checkmate. 2 Rooks vs King is an easy technical win.

The Queen has the moves of both a Bishop and a Rook.

Understanding the game is the first step to mastering it.

Not only knowing but understanding the rules of chess will enable you to utilize special rules and even basic moves in chess in your favour.

Another important step is to practice!

But an even more important thing to keep in mind is to have fun while doing it!